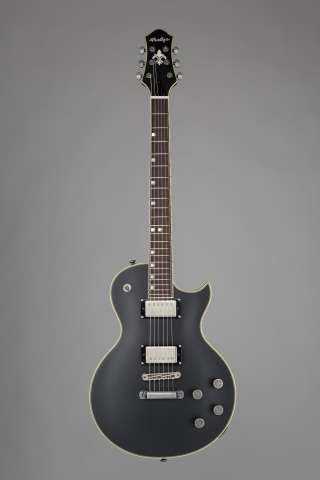 Prestige Guitars Ltd. is proud to announce that we have teamed up with rock legend Rex Brown; to design and release Rex’s first Signature Model Six-String Guitar. The “Rex Brown Custom” Signature Model is set to be unveiled this Friday, January 20th at Winter NAMM 2017, in Anaheim CA. Rex will join the Prestige team at our Booth – #1636, at 2:30pm on January 20th for the unveiling and will stick around for a meet and greet. Rex Brown is an American musician and author, best known as founding member of and longtime bassist for the Grammy-nominated, platinum-selling group, PANTERA (1982-2003). He is a former member of the band DOWN (2003-2011) and is currently the bassist for KILL DEVIL HILL. He is now heading up his first major solo project – The Rex Brown Band. The Rex Brown Band album is set for release in May 2017 and features Rex on Guitar, Bass and Lead Vocals.

The Rex Brown Signature Model is a single cutaway solid body, designed in direct collaboration with Rex and to his exacting “dream guitar” specs. In creating the this model, we incorporated Rex’s deep appreciation for vintage tone and feel, while bringing the best modern components offered to ensure that this beast would be able to capture his distinct voice both in the studio and on the road. The “REX” boasts a killer combo of a carved Maple top and solid Mahogany body and neck. This guitar is finished in matte black with cream 3 ply binding surrounding the body, neck and headstock. In order to keep this guitar sounding punchy but not too bright, we went with a rosewood fingerboard and we put Rex’s very personal touch on the fingerboard with a Custom Skull Inlay designed directly from a ring he wears day-to-day. Custom relic’d nickel hardware includes TonePros locking bridge and saddle, Grover Mini-Locking Rotomatic Tuners and nickel knurled knobs. We completed this beast with the perfect voice for this truly badass signature guitar; a pair of Seymour Duncan “Saturday Night Special” Humbucker pickups, with custom relic’d covers created by the Seymour Duncan Custom Shop. This guitar perfectly embodies Rex’s playing style and sound, and oozes rock n roll styling. The Rex Brown Signature Model will be priced at $1349.00 USD Street, and will come with a Deluxe Custom Hard Case and full Lifetime Warranty. Full Specs are as follows:

“The release of the Rex Brown Signature Model marks an important move forward in the evolution of Prestige Guitars. We consider ourselves very fortunate to have aligned with Rex and to have been entrusted to bring his dream guitar to life. Through many months of design and studio testing we have brought together all of the elements necessary to have a guitar that Rex will be able to use onstage and in the studio that will perfectly suit his new music and the tone and style he envisioned from day one. We’ve said it before, but Rex’s contributions to hard rock and metal through Pantera and KDH (Kill Devil Hill) are immeasurable. The next phase in Rex’s career will see him release his first solo album this May – The Rex Brown Band – and this new project is going to absolutely blow people away! To have him hitting the stage at major festivals, touring this new album, all with a Signature Prestige slung over his shoulder is an absolute honor.”– Adrian O’Brien, VP, Prestige Guitars.

A sample of my solo stuff on Loudwire Podcast #12