REX BROWN ON DEBUT SOLO ALBUM SMOKE ON THIS: IT STILL HAS ATTITUDE (INTERVIEW) 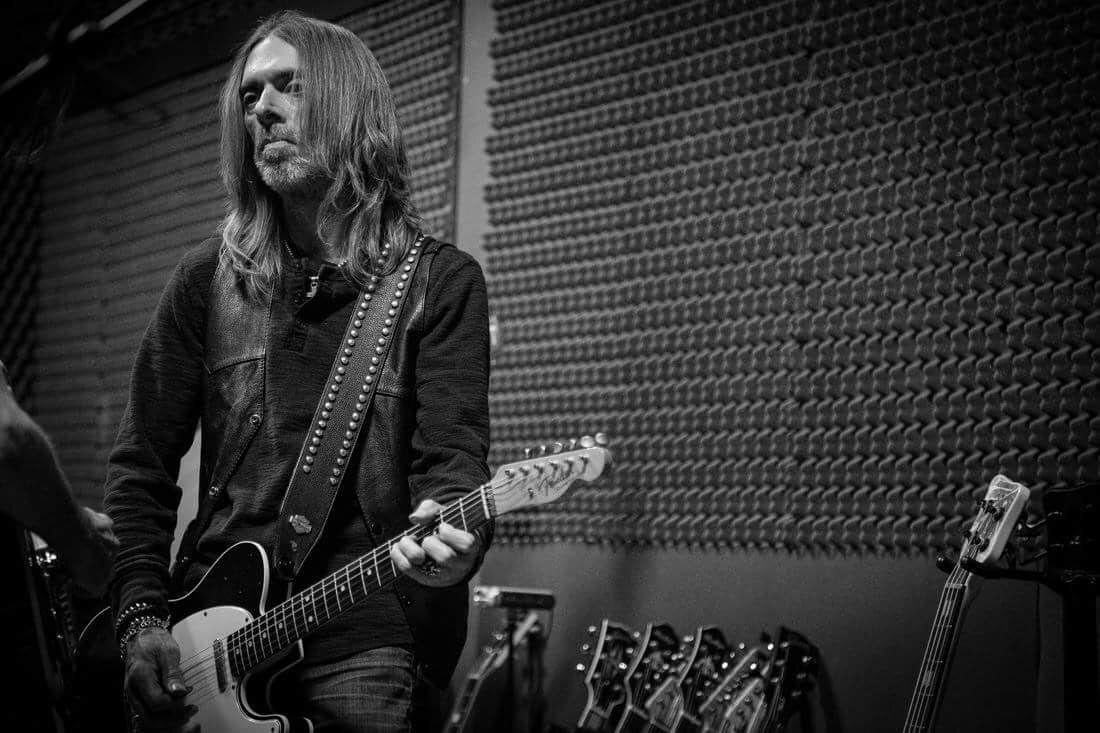 Pantera / Down legend Rex Brown has laid down some of the heaviest music in metal’s history, but those expecting the same punchy bass grooves won’t find them on his debut solo record, ‘Smoke On This.’ He’s turning back to his early influences as the album is rooted in classic rock and he spoke with Full Metal Jackie about why he made the decision to go solo, finding his direction and offered a bit of reflection on the Pantera legacy. Check out the chat below.

The one and only, Rex Brown. How are you?

We’re here to talk about your upcoming album ,and I haven’t talked to you in a long time. Are you in New Mexico?

Yeah. I’m out in New Mexico these days. I’ve been coming up to New Mexico for years. I’ve been here about five or six years. We just bought a new house, we gutted the whole thing and it’s a nice, easy, peaceful feeling.

Awesome. Let’s talk about this new album, it’s called Smoke On This and it’s coming out July 28. It was recorded in a short amount of time. Why was the spontaneity important for this album?

Actually it was recorded in a short amount of time, but it was written over about 15 months. Let’s see, where does the story start? I went to NAMM in Nashville the summer of ’15, I tell myself in ’14, “Look I gotta take some time off the road; I’ve been on this road for 20-plus years and then some. I started to get a little bit jaded and just didn’t — I just wanted to go live life a little bit. I’ve got small, not small kids, they’ll be 17. I went and spent some time with them and kind of regrouped. You know you have to do that sometimes. Going into Nashville, I had a real good friend who just moved there, got him a nice house and we just started writing tracks. The hardest part — we had narrowed down 24 songs down to 13 and then we tracked 11 in October of ’15.

Then I would go to Nashville about every six weeks and finish four off then I would hit a little road block for about 6 months. Bought a new home here and we gutted the whole thing and then… so it just kind of came together we really started working fully on at the end of last year to really get this thing done. For me, it was about finding the voice and that is what took a little bit of time. Singing for the first time, it’s petrifying when you don’t have the… you know, I sang before on other things but on this it was finding the voice that was going to match the music and everything else. Look, we started this off as just fun and then all of a sudden it became this monster. We just decided to keep pursuing and pursuing and I couldn’t be happier with it. I’m beside myself; I’ve gotta pinch myself sometimes.

It’s being called a “Rex Brown solo record” but it was a collaborative effort with Lance Harvill. How has working with him been different than working with anyone else throughout your career?

Lance and I have done some stuff before. We did some movie placement. We did a record with Terry Date producing Down — just one of those fluke kind of things down at Willy’s place about 7 years ago. So, I was going through the phase, I had my operation and everything else — I’m healthy as Hell, kids, so don’t freak out.

I’ve known Lance since the ‘before-we-got-signed days’ with Pantera. He is just this phenomenal guitar player and songwriter. At the same time, I had Christopher Williams, who plays with Accept. He has been playing in the studio in Nashville since he was about 17 years old and is just an incredible drummer. He came in and turned me onto this producer Caleb Sherman. From there the chemistry just bonded instantly. So it is a solo record that is what this is all about. It is me. You know what I’m saying? I have a band that is gonna back this thing on the road, but I wanted to go solo for a while. You know? So, it is a solo record. It’s not Rex and the Jalapenos or some crap, it’s me.

Yeah, I was just thinking that. It flew out of my mouth.

Obviously Smoke On This is not Pantera or Down. What will people who like those bands like about this album?

It still has the attitude. I think more than anything else. Anything that I do, if I’m gonna put it out it has to have integrity, number one. Number two, the songs have to be really good. I really don’t – this is just where I’m at musically right now. This is where — I was looking around the landscape and a lot of — the landscape of the crowds and what they’re into. It’s all about good songs. I don’t care — that’s all it boils down to, is good songs.

It really does, and the delivery and the way that you do it. Finding the voice was a big thing for them and then once I’ve done it it’s just so easy to within my range and everything else. I didn’t start — I’m just getting my feet wet on this, Jackie. I’ve got so much more material to put out. I just needed to take that break so I can find where I wanted to go. Sometimes you have to go a little bit backwards in direction or whatever, but I wanted — I was listening to a lot of ’70s rock. That was really what kind of drove this kind of thing. I was listening to a lot of ZZ Top and a lot of old Aerosmith. Instead of listening to the same song that you play every night after night after night on that stage, this is just a new turn. A new twist. Where I want to be five years down the road if I’m still kicking, which I’m sure I will be. It’s just where I want to be. I want this — at the same time, it’s gotta have fun in it. Those three letters, F-U-N or I’m just not gonna do it.

Pantera was one of the most important bands in metal history. What can you see now about Pantera that maybe you never realized back then in the midst of it?

Good question. I don’t know how to answer that properly. We were such a tight knit unit and it was such a wild roller coaster that went around it that in hindsight I think of where we could have gone if not for — you always think of the whys, or what could have, should have and we all know why. But in hindsight, I think we came in at the perfect time. We had the songs, we had what it took and number one, it was up to the fans.

We were a fan band and that was it. That was the biggest thing to me. All the accolades and everything else, when it comes down to it it’s about that song and that connection with the audience and I think that’s something we had and the chemistry between all of us that translated really good. I think that’s why it was a very important band at the time, it still is. I really don’t look at it — the bigger picture of it. I really don’t because it’s just part of my history. I’m damn blessed and grateful for everything but it was also a lot of hard work that was put into it. We all just pulled each other up by the boots and got after it.

Did you think while you guys were in it and while it was all happening that it would be as important as it is to the genre?

Well, of course everybody wants to be successful. Who wants to fall on their face? We just continued to strive to better ourselves as musicians and playing as much as we did, it was just one of those things that was instilled in us. It was just — it becomes to me almost like an addiction where, “Okay guys we’re going to have to stop and take a break because…” and that’s what we did. We needed to take a break, away from the game and then not be pressured into, “Oh we have to deliver this next record.”

And that was the point of Phil [Anselmo] and I doing that Down thing. We were just thinking, we put the record out and get it out of our systems and move on down the road. But we all needed a break away to capture — you have to do that in life. You just have to. For a musician you have to take these little breaks for your own sanity. Absolute.

You’ve worked with some very unique musicians. What’s the one thing that they all have in common?

I’ve been very, very fortunate. I think of drummers, being a bass player, and being able to play with some of these cats that I’ve played with. Number one, it’s just common decency in people. I’ve always tried to surround myself with good people. I think that’s what you have to do to keep going on in this business. You have to surround yourself with people that have the same drive that you have, the same passion and just keep on going. It’s not over until you say it’s over. For me, I’m gonna still be looking for that 13th note even know there’s 12 for the rest of my life. It’s — just grounded people, that’s who I like to work with. People who have their feet solidly on the ground. If you work together to make this common goal. That’s the most important thing.

Rex, what can you tell us about some of your plans? Is there going be a tour?

I’m right in the middle of putting together tour plans for the fall. You could see us out as early as, oh, I don’t know… maybe even July, but as of right now, we’re — the whole focus is getting this record out and getting it to as many people as possible. If you’re looking for a Pantera record, you’re going to the wrong place, but I guarantee if you like good rock ‘n’ roll you ain’t gonna be let down. It’s just my take on where I’m at right now. I made a solid record and I’m very proud of it and very gracious to still be doing what I’m doing.

Wish you the best of luck, really appreciate you had the time to do this tonight. Thank you.

Thank you, Jackie. Anytime. You’re wonderful and you alway have been to me and I appreciate that.

Thanks to Rex Brown for the interview. Pre-order your copy of ‘Smoke on This’ through Amazon or iTunes and look for the album out July 28 through eOne Music.