UltimateGuitar.com: Why It’s Much Easier to Sing While Playing Guitar Than Bass

The bass for me is just one of those things where you have to concentrate on every fucking note. 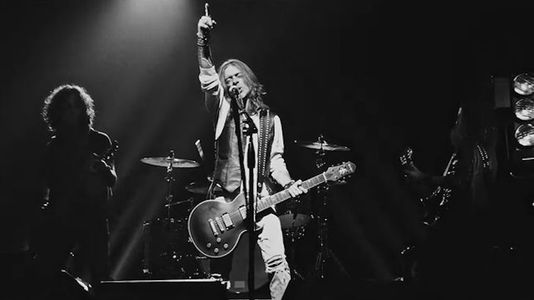 About fronting my new band and playing guitar instead of the usual bass:

It’s so much easier for me to play guitar and sing than it is for me to play bass and sing. The reason why is because the bass for me is just one of those things where you have to concentrate on every fucking note for it to be solid and thick. And when I started doing that during that first rehearsal, I felt like I still had a ball and chain around me. I really got to where I was comfortable playing guitar. And when I got those six cats in that room together, it just happened. I’ve never worked this hard for a record in my life. But it’s worth it. I’m damn proud of it. I’m damn proud of the songs. And finding that voice was another subject all together.

About my first guitar and the beginning of my musical journey:

It was a Gibson loaner and the strings were about 3/4 of an inch off that fucking neck. I must have been about 10 years old at the time when I moved to the big city. I lived on a peanut farm until I was about 10. That was about ’75. When I moved to the city that was when I met all these kids who were listening to Sabbath and Deep Purple and that kind of stuff.

Anyways, this guitar was an old Gibson. I can’t remember what it was and I don’t remember what the fuck happened to it. I think they took it back. But I’d love to have it today. I don’t know what it was, maybe an old J45 or something. I went and took lessons that the YMCA and of course with space like that between the fretboard and your fingers, you’re going to get some serious calluses.

So finally the guitar teacher came over and said, ‘Let me fix that for you.’ And we straightened out the neck and I started learning how to play. I joined the jazz band when I was about 11 when I was starting junior high. Back then they would give you chord charts where every downbeat was a different jazz chord. Hell I wasn’t that good and I could read it too good. I was just playing KISS songs out in the garage. But I had learned to play the bass clef and they needed a bass player so I became a bass player. But I continued to play guitar throughout the years.

It was one of those things where there were so many guitar players and not enough bass players and I had it down pat. I didn’t get stuck with it, I was just really good at it. I almost got a scholarship to North Texas State’s music program. But the old Frisbee and the joint prevailed and I took that path and I don’t think I’ve done that bad for myself.