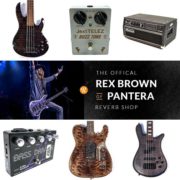 I´m pleased to announce I´m partnering with REVERB to sell more than 70 pieces of music gear used live and in the studio throughout my career.

In partnership with Reverb Gives, Reverb’s charitable giving initiative that provides youth music programs all over the world with the instruments they need to make music, I will be donating a portion of the proceeds from my Reverb shop to two charities: UpBeat Music and Arts, which helps students from all backgrounds in Chicago learn to play instruments and connect with music and arts, and Young Musicians Unite, which provides free, consistent in-school music education to underserved communities in Miami.

The shop is featuring bass guitars, amps, pedals, and electric guitars used throughout my career, including a Spector White Casper 4-string bass that was created for me in 2010 and used on every recording I´ve played on since then—from all the Kill Devil Hill records and my debut solo album to my second solo album, due out this fall.