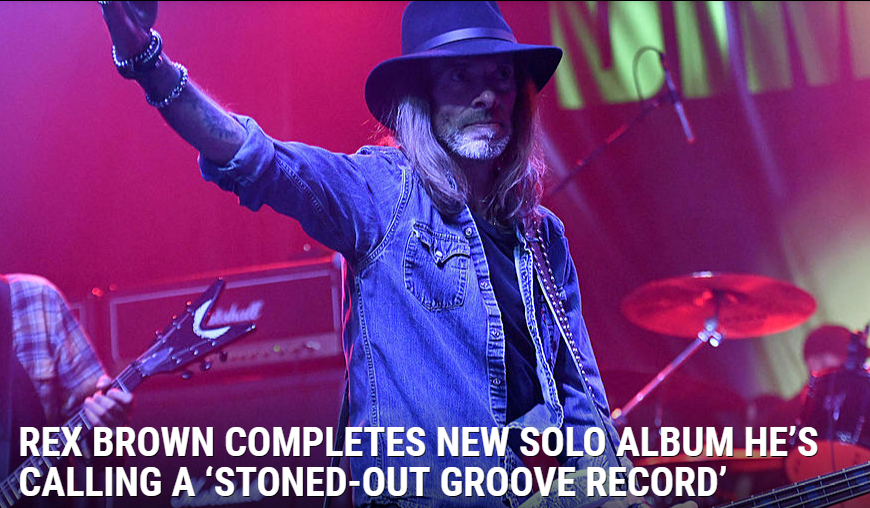 Rex Brown’s first solo album — 2017’s surprisingly robust Smoke on This… — showed the heady, introspective side of the former Pantera, Down and Kill Devil Hill bassist. But if you think that was a trip, just wait until he releases his next outing as a burgeoning singer-songwriter.

The musician won’t tell us the title just yet (“I’m thinking about calling it Album No. 2,” Brown recently joked to Loudwire) but from what he can share, it sounds like an even deeper dive into the smokey blues-rock he’s been perfecting with a little help from the sweet leaf. But don’t take that to mean the musician is mellowing out. Not exactly, anyway.

“There’s not a ballad on this fucking record,” Brown shared by phone from his New Mexico home. “It’s a stoned-out groove record. We smoked lots of hash making this album, I’ll just put it that way. And I’m not gonna make the same record twice: It’s got its rockers, it’s got that heavy blues tinge. It’s got some upbeat anthems that I brought in at the last minute, some I even had tucked away for a long time.”

That may come as a shock to listeners who enjoyed hearing the more vulnerable Rex Brown found on lilting solo cuts such as “Fault Line.” After all, the man himself told Loudwire earlier this year that his upcoming effort would be a “darker, introspective” affair by comparison. But the eclectic group of tunes Brown’s currently sequencing for release found their footing in a cloud of smoke following a time of loss. Brown’s former bandmate, Pantera co-founder and Hellyeah drummer Vinnie Paul, died last summer from heart failure.

“This record is really introspective,” he explained, “but in the sense that it just came naturally. I think that anytime somebody close to you dies — even though Vinnie and I weren’t really close at the end — you have to go back and peel the onion, just go through the layers of what life really means. The first four or five tracks that we did were really just — man, I swear to God, you hear about this stuff happening and it’s never happened to me before — but where the pen just starts going to the paper, and it just starts writing itself.”

The effortless sessions from that cannabis-fueled reflection found Brown narrowing his focus while branching out creatively. Marrying acoustic guitars, tasty electric licks and miles of fretless bass with more esoteric instrumentation, the seasoned performer threw caution to the wind once he fully acquiesced to the fact that he wasn’t making a metal record. (“Not that I still don’t have another metal record in me,” he warned.)

So then, just what kind of record is it?

“It’s got some really tripped-out, kinda stoner songs, but I wouldn’t call it stoner rock ‘cause it’s not in that genre — even though I hate the word ‘genre,’” Brown laid out before catching himself in what he clearly considered unneeded notice. “Honestly, I don’t care what people call it anymore; I don’t really give a shit. As long as I’m enjoying it, I think the fans will too.”

That unbridled enjoyment further manifests in the musician’s charitable spirit. Earlier this year, he launched an online storefront via Reverb where sales of his myriad vintage musical equipment go to benefit UpBeat Music and Arts, which helps Chicago students from different backgrounds learn to play instruments, and Young Musicians Unite, which provides free music education to underserved communities in Miami.

In fact, if you’ve watched Brown’s video for the sale, you’ve already gotten a taste of one of his new songs. The music heard in the clip is actually the bones of a tune from the as-yet-untitled album.

“Its called ‘Stoner Blues,’” Brown clarified. “What you’re hearing is just the bed track, but it’s a pretty funky little number. It’s sorta tongue in cheek, and it was just a little ditty we were fucking around with. But it turned out to be one of my favorite songs on the album. It’s got some banjo on it, it’s got mouth harp, it’s got all kinds of crazy shit.”

All the same, that sonic freedom — the musician’s experience writing, recording, touring and performing that’s now coalesced in unfettered, inspired arrangements — also serves to underscore the artist’s trademark quartet that won’t get a second act.

“I was just kinda bummed after Vinnie,” Brown laid out. “You’re still in shock. People who’ve heard the name Pantera but aren’t familiar with us, they’ll ask if we’re still playing. They don’t know that Dime [Dimebag Darrell, Pantera’s guitarist] was also tragically taken from us.”

Brown’s second solo album is expected later this year or early next. He plans to tour extensively surrounding its release.