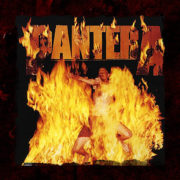 By the time most bands start working on their final record, it’s pretty obvious internally that the members aren’t going to stay together much longer. That wasn’t the case when Pantera entered the studio with co-producer Sterling Winfield to work on their swansong, Reinventing the Steel, which came out March 21, 2000.

After several years of mounting friction, which hit a peak during the cycle for 1996’s The Great Southern Trendkill, Pantera got their power groove back and came out fighting. Not only were the members vibing musically, they were getting along better than they had in ages. Vocalist Philip Anselmo had curbed his addiction to pain medication (both legal and illegal) that he was taking for a debilitating back injury (he would later need surgery), and he was more lucid and fired up than he had been since Pantera released Far Beyond Driven.

“There was a new fire lit under my ass,” he admits. “Dimebag [Darrell] and I were pretty damned close on this one because I had been a bit of a wreck before, and when I showed up for jam sessions, I think Dime and the rest of the guys were psyched that I wasn’t constantly fucked up.”

Anselmo wasn’t exactly sober during the entire process, but his commitment to Pantera was strong and the he lyrics penned for songs like “I’ll Cast a Shadow” and “We’ll Grind That Axe For a Long Time” were honest and visceral, revealing his pride in the band’s accomplishments and his desire to defeat his demons.

“There was a renewed level of brotherhood there and a renewed sense of enjoyment with the songwriting,” he says. “It was the first record we did without [producer] Terry Date and it felt like there was a breath of fresh air and some serious bonding going on.”

Pantera worked on Reinventing the Steel at the studio Darrell built prior to recording the band’s previous album, The Great Southern Trendkill, and took their time writing. To get inspired, the members examined what had worked for them on past albums and, without aping themselves, composed songs that integrated the styles of rhythms, bridges and hooks that made them a metal powerhouse.

“We chose our five favorite songs from each album we had done and picked apart what we liked about them,” bassist Rex Brown says. “In that regard, Reinventing the Steel was kind of a rebirth for us. Everyone came to the table with what they thought was cool and what they wanted to do.”

The process wasn’t entirely free of obstacles. While Pantera were writing songs for Reinventing the Steel, Dime and Vinnie’s mother died from cancer, Anselmo reveals. Both of the Abbott brothers were understandably crushed by their mom’s death. Along with her husband Jerry (who produced the band’s self-released records and managed Pantera before they signed to EastWest), Mrs. Abbott had been a strong supporter of Pantera and had grown close to all of its members.

“Dime and Vinnie were very close to her and she was a big part of my life and Rex’s life as well,” Anselmo says. “When somebody’s mother passes it’s a big, big thing. I was a pallbearer at the funeral. In a weird way, that brought Dime and I closer together.”

Instead of wallowing in self-pity, Vinnie and Dime became even more motivated, spending every hour in the studio, focusing single-mindedly on crafting an endless series of fist-in-mouth riffs and gut-busting beats. Anselmo and Brown, as well, were integral parts of the process. “We were very determined and we were all getting along well,” Anselmo says. “So in a way, it was very laid back. I remember discussing with Dimebag what he liked and what he didn’t like. We went back and forth and made sure the songs were great.”

The process worked. Reinventing the Steel, trumped the caustic vitriol of The Great Southern Trendkill and rivaled the band’s best albums. Not only does the music hold up, it’s classic. The riffs are bludgeoning and memorable, the vocals multifaceted and corrosive and the mix laden with mindblowing guitar effects and Dime’s unparalleled leads. Highlights include the flanged “Cowboys From Hell”-esque guitar opening and harrowing whispers of “Hellbound,” the mid-paced, blues-inflected rhythm and stuttering beats of “Goddamn Electric,” the skin-peeling wah-wah intro and Sabbathy, railroad chug of “Revolution is My Name” and the rapid-fire, D-beat-fueled demolition of “Death Rattle”; though every song is memorable, featuring the band’s trademark blend of raw brutality and scathing melody.

“If you put Reinventing the Steel next to Far Beyond and Vulgar, I think you come out with something very close,” Brown says. “Take a song like ‘Revolution is my Name.’ That’s a great track that could have ended up on Far Beyond Driven. Dime really came out of his hole and delivered.”

Adding to the impact of Reinventing the Steel was Slayer guitarist Kerry King, who added a guest solo for “Goddamn Electric.” “[In 1999,] Dime went down to Ozzfest, [which featured Slayer], and brought a four-track recorder with him,” Brown recalls. “One day he put Kerry inside of the fucking bathroom, set up the recorder and said, ‘Play this lead real quick.’ And Kerry let fly.”

Sadly, While Pantera was touring for Reinventing the Steel, the band went on a downward slide. Anselmo’s back pain got worse and he started medicating more frequently, using booze, pills, methadone and heroin. He distanced himself from his band mates when he wasn’t onstage and often rambled incoherently during performances. The Abbott’s started traveling in their own bus and Brown, who was a full-blown alcoholic, and Anselmo would take the other. Despite the setbacks, Anselmo still delivered in concert. In the end, however, Pantera burned too bright for too long. The band took very few breaks between their rise in 1990 and their final tour in 2001, a factor which no doubt contributed to Anselmo’s continued back pain and the members’ growing enmity towards one another.

“We should have stopped to all go into rehab, but that wasn’t our style,” Brown says. “We were red hot and we didn’t want to stop playing no matter how badly we were getting along. That eventually took its toll.”

The end of the line came after a gangbuster show in Japan. Pantera tried to maintain their composure offstage, and might have stumbled through the rest of the tour had it not been for September 11. Pantera were in Dublin, Ireland when they learned about the terrorist attacks of 9/11. Immediately, the rest of the tour was canceled and when they could get flights back home, Pantera returned to the States.

They planned some time off to regroup. During that period, Anselmo played in a number of underground side projects, including Down (now his main gig), Superjoint Ritual, Necrophagia and Viking Crown. Unable to contact their singer, and convinced he was hooked on heroin, Dime and Vinnie put Pantera on indefinite hold and formed the band Damageplan. Tragically, during a Damageplan concert in Columbus, Ohio in 2004, Dimebag was shot onstage and killed by a mentally ill fan.

Despite rumors that Pantera would reunite with Zakk Wylde, Vinnie Paul declared that Pantera was done, and although their music will continue to inspire new generations of musicians and fans, he claimed he would never play with Anselmo and Brown again.

This assertion came despite Anselmo’s repeated efforts to reconnect with Vinnie. While the singer realized that probably would never happen, both Anselmo and Brown have taken the stage with Wylde and others on several occasions to play Pantera songs. Any chance of a reunion was dashed in 2018 when Paul passed away.